Pondi to Trichy and Beyond 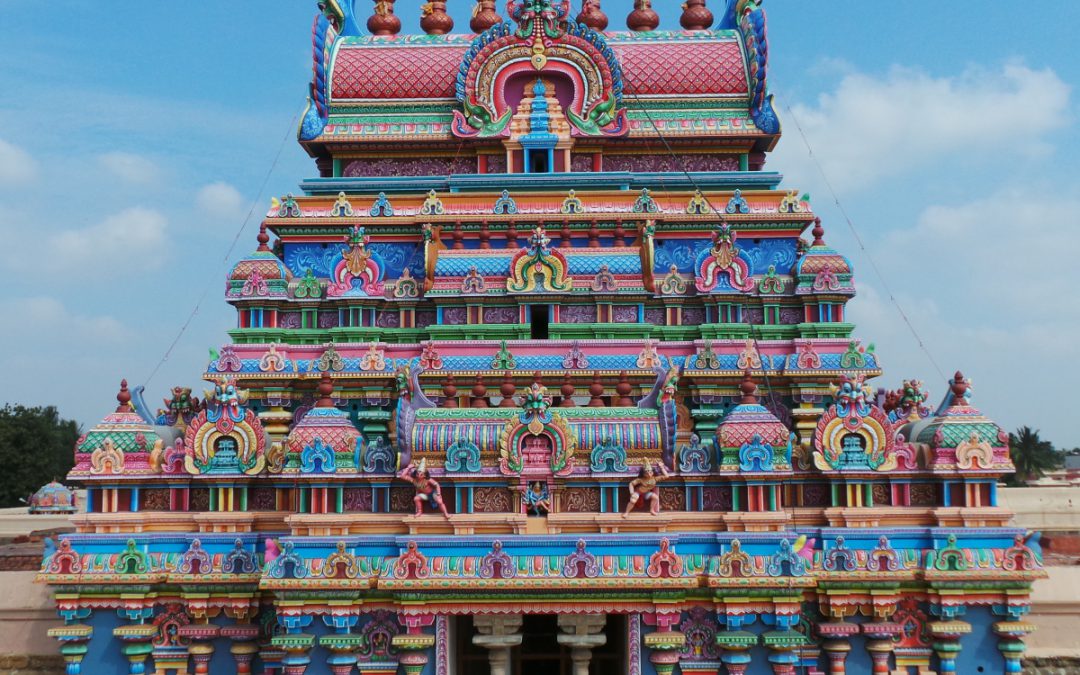 In Pondicherry we walked the blocks of the French Quarter with our guide, a young guy with a Masters in Engineering who specialises in restoration architecture. We were somewhat horrified to find the French Quarter was known as Whitetown and the rest of the city as Blacktown until quite recently. But as our guide said, “All of my white friends want to be brown, and all of my brown friends want to be white”. So maybe it’s OK.

With its French architecture, bright red and yellow walls, blue and white street signs and streetlights it’s a little slice of Paris on the sub-continent. Sadly, all the shops and cafes were closed due to the industrial action involving the Jallikuta, which I’ll come to in a minute, so after lunching at the hotel (something we rarely do) we set out with our afternoon guide. In a beautifully Indian way, the afternoon guide revisited several locations we had been to in the morning, but we kept mum and ended the day at the Sri Aurobindo ashram. Although Maggie said the energy in the ashram was so strong she could have meditated there for hours, the fiscal might of the ashram is giving the locals some headaches, as they now own 68% of all buildings in the French Quarter. That evening we dined, for the second time in four days, with our friend Mary Butler from London. Some readers will recall that Mary was an eminent publisher at the V&A, but we hadn’t seen her for a quarter of a century. Fate has brought us together in India at the same time. The previous night we’d visited Surguru, a simple restaurant serving excellent South Indian food. The only problem was the menu had no descriptions so you could only guess what a dish might be. This process produced a great meal but the downside of the simplicity of the restaurant meant it was dry evening.

We liked Pondi, it was walkable, had great food and apart from the fact that everything was shut, had a very cool vibe.

A year ago I mentioned that there is no change to be had in India. If the tuktuk fare is 80 rp, there’s no point in giving the driver 100 rp and expecting anything in return. “No change, sir”. If anything it’s got worse as the government demonetized the 500rp (about $10) and the 1,000rp ($20) notes. This happened overnight, was a complete disaster and certainly did nothing to curb the black economy. Last Monday the Government relaxed the rules a little, allowing a maximum of 10,000rp to be withdrawn each day from the ATMs (if you can find one that’s stocked). The ATMs dispense only 2,000rp notes worth about $40. And no-one has change. If the tuktuk guy has no change for 100rp, your 2,000rp note is useless. You need lots of small rupee in India – the man who looks after your shoes at the temple, needs 10rp each (total 40c). The elephant that blessed Maggie put her trunk out for 50rp (about a dollar), and we’re carrying around a stack of notes each of which is worth $40. So in Pondi, we took ourselves to the Bank of India to get small money. We climbed to the second floor of a fairly dilapidated building – even by Indian standards – and squeezed through the partly blocked door into the bank. Where we were ignored by everyone. The only one who showed any interest was the old bloke in uniform at the door clutching an ancient Lee Enfield .303. So we presented ourselves at the desk of the Assistant Manager and told him we wanted to change our 2,000rp notes into 100rp and 50rp. This is how the conversation unfolded:

Him  “Yes Sir, this most certainly is a bank. This is The Bank of India, Sir”.

Him  “No, no Sir, we most certainly do have money”.

Me  “In small denominations?”

Him  “No Sir. This is not what banks in India do”.

Soon after leaving Pondicherry, Naralayan, our intrepid driver stopped so we could visit a local temple with some extremely large and frightening carved figures. Often in India, you have to guess who these deities might be as their name tags are either in Hindi or Tamil.

An hour further down the road and we stopped at Chidambaram to visit the great temple of Nataraja. Our local guide was waiting for us when we arrived and before we entered the temple we were amazed at the size of the chariots parked outside. Constructed from rosewood, the chariots are used once a year to parade the deities through town, pulled by hundreds of worshippers. The temple is very sacred as it’s the location where Shiva and Kali got into a dance competition. Shiva won with that little foot to forehead move you often see, and Vishnu awarded him the title of the Great Cosmic Dancer. It’s a pretty special temple.

Our guide, who had caught a bus at 5.30am to meet us mid-morning, stayed with us as we travelled across the delta and through the rice-growing area. By the time we reached Tanjore it was raining hard. As Tamil Nadu has been in drought for years this was welcome rain for which we obviously claimed credit. During the afternoon we had crossed several wide, dry rivers and a huge water storage dam that was empty except for the odd pool. Interestingly, one of the pools had at least half a dozen crocodiles floating menacingly on the surface.

In the rain, the guide took us on a very damp trip around the Brihadishwara Temple. This temple to Shiva, unlike many we had visited to this point, is not painted, and if you could imagine it without the rain, the tawny granite would have captured the suns rays beautifully. But we were cold and we were soaked and once we were dropped at the hotel we elected to spend the night in.

Next morning the rain had stopped and the sun was shining again. An hour down the road we stopped at Trichy (aka Tiruchirappalli) and picked up another local guide for a visit to Sri Ranganathaswamy temple. This is the biggest temple in all of India and its elaborate painted gopurams are the highest in Asia. We then climbed the 83 metre high Rock Fort Temple built on the granite outcrop that dominates Trichy. 400 steps up and 400 steps down, all in our bare feet of course. Then it was on to Chettinad.

On the way, Naralayan, our driver took us off-piste into a small dusty village. It looked for a moment as if he’d become lost until with a smile he stopped the car and announced, “village temple”. It was the most amazing sight as the walk to the temple was lined with hundreds of temple horses in varying stages of decay. This temple is dedicated to Ayyanar, a pre-Vedic Tamil deity, well before Hindu times, and the terracotta horse was the traditional offering, generally associated with animal sacrifice which we won’t get into here. But one could be forgiven for thinking that this is where funfair carousel horses go to die.

Tonight we slummed it in Chettinad, a series of villages containing mansions of indescribably beauty. Chettinad was originally settled by an itinerant trading class who emerged by the mid 19th century as money lenders and primary providers of credit for most agrarian and commercial trade in the region. Between the 1850s and 1930s they constructed thousands of palatial homes, using the finest materials available; teak from Burma, Italian marble, glass from Bohemia. Most have now disappeared but a small handful, including The Bangala, where we are staying remains. Bangala was originally a tennis club, and has been added to by the family, so that it now contains 33 traditional rooms, a big pool, and employs 60 staff.

Dinner tonight was a four-course fixed menu and it felt a little like being at boarding school. A “mature”, yet exceeding elegant French woman was playing house-master, (the French account for the majority of the guests at Bangala). Barely were we seated, when the soup arrived, delivered by white-jacketed Tamil waiters. Although it was a very tasty pumpkin soup, it showed little connection to the country in which we were eating. Our plates were whisked away and the appetizer was slopped onto clean plates. First a slop of prawn masala, (delicious), then a big spoonful of mushrooms, tasting of, well, just mushrooms really. Then a slop of warm sliced strawberries and beetroot. Strawberries AND beetroot! As someone I know would say, “How Bizarre!” The drinks were limited to beer or a glass of wine, with no menu or alternatives offered. Then the main was slopped on, with the first large slop being quail, which was passed over to my plate at the first suitable moment by the vegetarian, and a pudding of crème caramel followed. Apart from the elegant French woman, there was a white clad major-domo who was in charge of the drinks, and he paraded around the room with a tray loaded with long-necks of British Empire beer dispensing to the thirsty. It was all over in an hour, but it was a “not-to-be-missed” experience.

But the highlight was a visit to our table by Mrs Meenakshi Meyyappan, (another Mrs M), who is the owner of Bangala. She is a 84 years young and has an enormous passion for these houses, to the point where she has self-published a huge, glossy, coffee-table book. She related how, at lunch that day, she was arguing with her children who were trying to persuade her of the importance of Jallikattu to their cultural heritage. “I got very angry with them”. She said, “I told them, that this is their heritage right here. These houses are their heritage, not some bull somewhere”. Go Mrs M!

And I haven’t yet had a chance to explain Jallikattu which has disrupted travel and life in Tamil Nadu since we arrived. That’ll have to wait until next time.